Nations trade with one another for the same reason that  individuals and business firms within a country trade: both sides expect to benefit from the transaction. They benefit because trade enables them to exchange things they dont need for the things they do need and wont. Some areas can produce things that others cannot.

Manufacturing can also be performed more efficiently in some parts of our country than in others. This creates such things as absolute advantages, tariffs and quotas

Absolute advantage means nations will gain because of differences in terms of climate, natural resources, labor supply, capital, and technology.
A tariff  is a duty ,or tax, on imports. There are two basic types of tariffs. Revenue tariffs are levied as way to raise money.
Restrictions on the numbers of certain specified goods that can enter the country from abroad are called quotas.

Let’s look into the effects, that all those thing have on today’s global economy.

Un states, that global growth is expected to remain at 3.0 per cent in 2019 and 2020, however, the steady pace of expansion in the global economy masks an increase in downside risks that could potentially exacerbate development challenges in many parts of the world, according to the World Economic Situation and Prospects 2019. The global economy is facing a confluence of risks, which could severely disrupt economic activity and inflict significant damage on longer-term development prospects. These risks include an escalation of trade disputes, an abrupt tightening of global financial conditions, and intensifying climate risks.

In many developed countries, growth rates have risen close to their potential, while unemployment rates have dropped to historical lows. Among the developing economies, the East and South Asia regions remain on a relatively strong growth trajectory, amid robust domestic demand conditions. Beneath the strong global headline figures, however, economic progress has been highly uneven across regions. Despite an improvement in growth prospects at the global level, several large developing countries saw a decline in per capita income in 2018. Even among the economies that are experiencing strong per capita income growth, economic activity is often driven by core industrial and urban regions, leaving peripheral and rural areas behind. While economic activity in the commodity-exporting countries, notably fuel exporters, is gradually recovering, growth remains susceptible to volatile commodity prices. For these economies, the sharp drop in global commodity prices in 2014/15 has continued to weigh on fiscal and external balances, while leaving a legacy of higher levels of debt.

IMF states, that growth will decrease in 2019, while a year ago, economic activity was accelerating in almost all regions of the world. One year later, much has changed. The escalation of US–China trade tensions, needed credit tightening in China, macroeconomic stress in Argentina and Turkey, disruptions to the auto sector in Germany, and financial tightening alongside the normalization of monetary policy in the larger advanced economies have all contributed to a significantly weakened global expansion, especially in the second half of 2018. 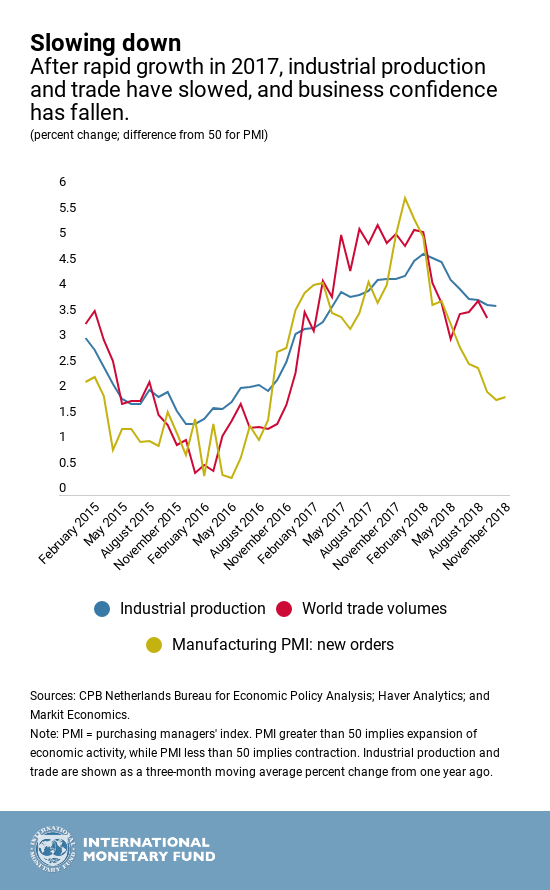 With this weakness expected to persist into the first half of 2019, IMF-s new World Economic Outlook (WEO) projects a slowdown in growth in 2019 for 70 percent of the world economy. Global growth softened to 3.6 percent in 2018 and is projected to decline further to 3.3 percent in 2019. The downward revision in growth of 0.2 percentage points for 2019 from the January projection is also broad based. It reflects negative revisions for several major economies including the euro area, Latin America, the United States, the United Kingdom, Canada, and Australia.

After the weak start, growth is projected to pick up in the second half of 2019. This pickup is supported by significant monetary policy accommodation by major economies, made possible by the absence of inflationary pressures despite growing at near potential. The US Federal Reserve, the European Central Bank, the Bank of Japan, and the Bank of England have all shifted to a more accommodative stance. China has ramped up its fiscal and monetary stimulus to counter the negative effect of trade tariffs. Furthermore, the outlook for US–China trade tensions has improved as the prospects of a trade agreement take shape.

There is no 100% certainty what will happen to global economy this or next years, there are some forecasts, but only future will show us if those would come to life. The only thing that is certain, is that the state of global economy is vital for our everyday life.

Article 'Effects of today’s global economy' published on May 27, 2019, 1:31 pm in 'International Economy '. Leave comment!
← 7 Best Ways to Earn Passive Income: Always Be Earning
Integrating Marketing with Other Business Solutions: Here are the Best Options for Your Company →

We use cookies on our website to give you the most relevant experience by remembering your preferences and repeat visits. By clicking “Accept”, you consent to the use of ALL the cookies.
Do not sell my personal information.
Cookie SettingsAccept
Manage consent

This website uses cookies to improve your experience while you navigate through the website. Out of these, the cookies that are categorized as necessary are stored on your browser as they are essential for the working of basic functionalities of the website. We also use third-party cookies that help us analyze and understand how you use this website. These cookies will be stored in your browser only with your consent. You also have the option to opt-out of these cookies. But opting out of some of these cookies may affect your browsing experience.
Necessary Always Enabled
Necessary cookies are absolutely essential for the website to function properly. These cookies ensure basic functionalities and security features of the website, anonymously.
Functional
Functional cookies help to perform certain functionalities like sharing the content of the website on social media platforms, collect feedbacks, and other third-party features.
Performance
Performance cookies are used to understand and analyze the key performance indexes of the website which helps in delivering a better user experience for the visitors.
Analytics
Analytical cookies are used to understand how visitors interact with the website. These cookies help provide information on metrics the number of visitors, bounce rate, traffic source, etc.
Advertisement
Advertisement cookies are used to provide visitors with relevant ads and marketing campaigns. These cookies track visitors across websites and collect information to provide customized ads.
Others
Other uncategorized cookies are those that are being analyzed and have not been classified into a category as yet.
SAVE & ACCEPT